The SEPA (Single Euro Payments Area) is a European project of unification of means of payment. 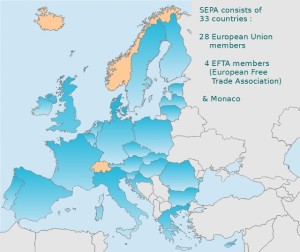 SEPA is the Single Euro Payments Area, including EU member states, plus Norway to Iceland, Liechtenstein, Switzerland and Monaco.

The Council and the European Parliament adopted in February 2012 a Regulation setting end dates for migration to SCT and SDD. In line with this EU law, national credit transfers and withdrawals are permanently replaced by their European equivalent of 1st August 2014 in the countries of the Euro zone. For other countries, the deadline is October 31, 2016. After the due date passes, it will not be possible for a service user payment of transfers and / or samples to the national format.